Carolyn:  It's going to be difficult to discuss this book without giving out spoilers, so since I'm up first, I'll post the bookcover and the blurb.  Heh.

As far as the cover's concerned, it's the standard romance-type cover, only this time they put an undershirt on "Mad" Rogan. None of the covers in this trilogy do justice to the stories behind them. These books are so much more than your vanilla romances plus each one is a solid five stars on Amazon.  Wildfire has 296 reviews; White Hot has 645 reviews and Burn for Me, the first book, has 1318 reviews and they ALL have five solid stars.**

But, take a look at the cheesy cover: 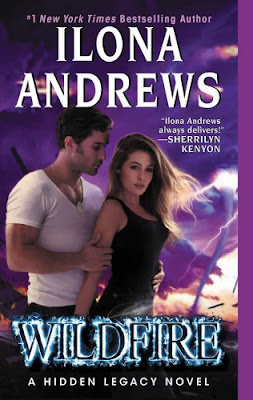 Nevada Baylor can’t decide which is more frustrating—harnessing her truthseeker abilities or dealing with Connor “Mad” Rogan and their evolving relationship. Yes, the billionaire Prime is helping her navigate the complex magical world in which she’s become a crucial player—and sometimes a pawn—but she also has to deal with his ex-fiancée, whose husband has disappeared, and whose damsel-in-distress act is wearing very, very thin.
Rogan faces his own challenges, too, as Nevada’s magical rank has made her a desirable match for other Primes. Controlling his immense powers is child’s play next to controlling his conflicting emotions. And now he and Nevada are confronted by a new threat within her own family. Can they face this together? Or is their world about to go up in smoke?

**as of this writing.


Lori:  If there was ever a reading slump happening, this book kicked it to the curb while wearing stiletto boots and looking like a boss.

This book was perfection.

I liked the first book but it wasn't something I'd burn down a house to get to. The second book was much more enjoyable as Nevada and Connor's relationship blossomed and their power became a large part of who they were. I enjoyed Nevada's family. My only issue with the second book was the cast of characters had me confused at times.

But. This. Book. Was. Perfect.

I was 100% on Nevada's side and cheering her on with every step.


Carolyn:  And it was seeing Connor Rogan through Nevada's eyes, her realization of his true self and how much he loved her. How he let her do her thing despite his knee jerk reaction to protect her. Both characters grew so much in this book; I think all of the characters did and that's what made it such a satisfying read.

So, what did you think of Victoria? Or, as they call her on the Andrews' blog, EG (Evil Grandma) lol.

And I have to admit I was a little disappointed in Penny, Nevada's mom. She couldn't seem to learn from the past and wanted to handle the current situation with Victoria as she and her husband did in the past. I don't think she ever did buy into the House solution, but still, I'm pretty sure she'll back up any decision made through family consensus.

I'm totally hoping for a fourth book ASAP. Because I am an Old Fart, after all. And when my time comes I'm hoping to take all my Ilona Andrews books with me and I by God will figure out a way to read any new ones after my departure. Heh.


Lori:  Carol, if I outlive you then I'll visit your grave and read the damned books to you myself!

I found Penny to be somewhat ineffectual. Nevada has taken over the family and is doing what she can to keep everyone safe. Obviously hiding won't work so her constant harping about it is foolish

Victoria was a terrific character. Her evil was tempered. I could see her becoming an ally to Nevada in later books if the authors decide to take it that way. Victoria is the kind of person who admires strength and the Baylor family has that in spades.

I just loved this book on so many levels. It was brilliantly paced, there was a great love story, especially in seeing how two strong people can make it work, despite having boundary issues. Rogan is a wonderful hero, Nevada is a wonderful heroine.

Oh, and their dinner date from hell was pure joy as other Primes kept coming in and harshing their vibe. Just damned excellent!

And although this book is touted as the conclusion to the trilogy, I don't believe it will remain a trilogy for very long. The ending was more or less open ended; even though the main plot was brought to a satisfactory conclusion, several plot threads remain open, including the identity of Caesar. I know, Lori, you think you know who it is, but it was never stated for sure. And the Andrews can be verrrry sneaky.