A Study in Scarlet Women by Sherry Thomas

It's Saturday morning and I haven't exercised at all this week. I should be at the track right now walking in endless circles while listening to female empowerment songs but it's raining and I'm glad because I just need a day off. A real day off.

A day where books and coffee and quiet are the norm.

And oh my, let's talk a moment about books.

I've been reading very little in recent years. I used to gobble books like candy but life gets hectic and there's so many responsibilities and nowadays if the book doesn't grab me or impress me within the first couple of pages then I'm moving on.

A Study in Scarlet Women by Sherry Thomas was a damned good grabber. It's a Sherlock Holmes mystery but get this... Sherlock is a woman. Watson is a woman. And Sherlock who is really Charlotte can only use her brains to solve mysteries because in England way back whenever.... women were constrained under societal rules. So Charlotte/Sherlock uses her brains and sends Scotland Yard chasing the clues she needs.

Why the book works: Charlotte is different. She's brilliant and doesn't fit into conventional society. She knows it and her family knows it and her father gives her lip service promising to let her find her own path if she plays by the rules till she's a certain age. She plays. He lies.

Charlotte creates her own downfall to try and get what she wants. It doesn't really work. But then she meets Watson, a friend of a friend who helps her out and becomes her mentor in a sense.

By the way, Charlotte is in love with a man she cannot have. Marriage and morals keeps them apart (not Charlotte's moral, his).

Why the book doesn't work: since Charlotte is a woman and can't be out there solving the crimes, the book relies heavily on Inspector someone and someone else to do the legwork and get the juicy stuff. Then there's the paramour and that's 2 or 3 men and I couldn't keep them all straight.

I just wanted more Charlotte. And more of Charlotte's sister Livia who is on the edge of being another great character. The men were forgettable but the women were stunning.

Charlotte Holmes is an awesome as fuck character. Thank you Ms. Thomas for her.
Posted by Lori at 12:00 PM 1 comment:

An NSV in weight watchers lingo is a Non Scale Victory.

So last night the neighbors across the street had a 50th anniversary party. I only know them because they're yellers and constantly are yelling either at the dogs to stop barking or fighting with each other (quite loudly) dropping F bombs the way I used to drop my panties for good looking fellas.

Anyway, we went to their anniversary party. And I wore a top that I bought months and months ago that I realized I could wear as a dress now, it's so loose and long. NSV.

As an aside: last night as I was falling asleep the neighbors got home from their party and started yelling again and it was the perfect moment. Got to admire 50 years together and still screaming fuck-you at each other.

So in other news, I'm actively seeking other employment since my boss called me a shithead. Do not ever let me be a woman who allows abuse. I have an interview this week at my dream place of employment so Mollie and I are hitting the mall today to try and find an interview dress and shoes. To say I have nothing to wear is true. I have workout clothes and scrubs and 3 casual tops. Yikes.

Still working on outline for Carol and my new project. It's interesting to outline since this is something I haven't done before. But it's really helpful and I can already see where plot is going to need to be beefed up. In other words: Carolyn, get ready to start working...

Reading A Study in Scarlet Women, a Sherlock Holmes retelling by Sherry Thomas. Expect a joint review soon. I will say, more enjoyable than I thought but a little problematic.

Not much more else to say. Read the NYT interview with POTUS. Amazing to see how truly ignorant the man is. I would make a better president than him and there's so much I don't know. Fascinating reading though. He's a classic there's no there, there.

So had two bad work days. Okay, have had more like nine bad work months but the last two days were really disheartening. And with the boss calling me a shithead the previous week, I'm pretty done with this place.

But that's okay. The money there is good and we all know he pays well because he's impossible to work with. And I figured for the money I could put up with a lot. But my limit was reached with the shithead comment and then two days of disrespect with co-workers put me over the edge. I took today off to polish my resume and start applying for new jobs.

Happily I can say my resume is updated and I've already put in applications at the hospital.

However.... I got home last night in a slightly foul mood and ate chips. Stayed in my weight watchers points but damn, I ate chips and they were good. Then I scanned through the Weight Watchers chat and saw a #skinnyforsanta challenge. And I joined. So 5 months from now I want to be 170. As of this morning I'm 192 which puts me at exactly 60 pounds lost.

I'm fucking proud of myself.

Other news:
1. I cannot read Jill Shalvis. Sorry Carolyn. She just isn't a good enough writer.
2. I want to reread the Hitchhikers Guide books.
3. Mollie still hasn't gotten contacts because her eyes are too small. Second set of specialty contacts are ordered for her to try.
4. I've given up on jogging but I'm still walking. And saving my money to join the gym.
5. I've gone from wearing 4X tops to XL tops. My wardrobe is shrinking but also my new tops are really much cuter.

6. Carolyn and I are working on writing something new.

It's going to take us forever and a day but the premise is solid, the characters are interesting and I'm excited.

Love to everyone.
Posted by Lori at 1:38 PM No comments:

How To Be Good 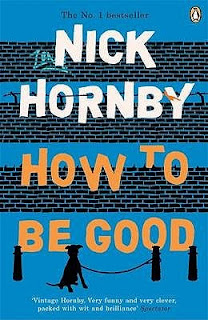 Katie Carr is a good person…sort of. For years her husband’s been selfish, sarcastic, and underemployed.

But now David’s changed. He’s become a good person, too—really good. He’s found a spiritual leader. He has become kind, soft-spoken, and earnest. Katie isn’t sure if this is deeply felt conversion, a brain tumor—or David’s most brilliantly vicious manipulation yet. Because she’s finding it more and more difficult to live with David—and with herself.

Have you ever read a book that enraged you? A book that had a good idea but was written with so much spite and disdain that you wanted to punch the author in the face? If you haven't, might I suggest that you try How To Be Good by Nick Hornby.

This is a well written book in the sense that Hornby can write and he has an engaging voice. But...

But wait. He gets touched by a faith healer (who is also a stupid character) and then becomes a nice person. Except he isn't really nice at all. He gives away money, gives away his kid's toys, is sanctimonious and although he's no longer bitter and sarcastic he's still a major dick.

So do we like Katie? Fuck no. Katie is insincere, selfish, emotionally unattached from her family, her life, her children and the people she treats. She blames her husband for her straying but she's not decent enough to make choices to connect to her life or even try a little harder. Her entire life is a Katie vs the World and everyone loses.

Oh, and the ending. Let's not forget the worst ending ever.

it the book ends with Katie and David admitting basically that they're both faking it and neither feels connected to anything. There's no love, no hate, no caring. Just two soulless people sharing a life, destroying their kids and trying to pretend they're human.

These are two people that you know one day will be driving a van, picking up hitchhikers and murdering them in the basement just to feel a thrill as their victims die. And what I seriously hated about the book was the feeling that the author was being sincere. Which made me hate him too.